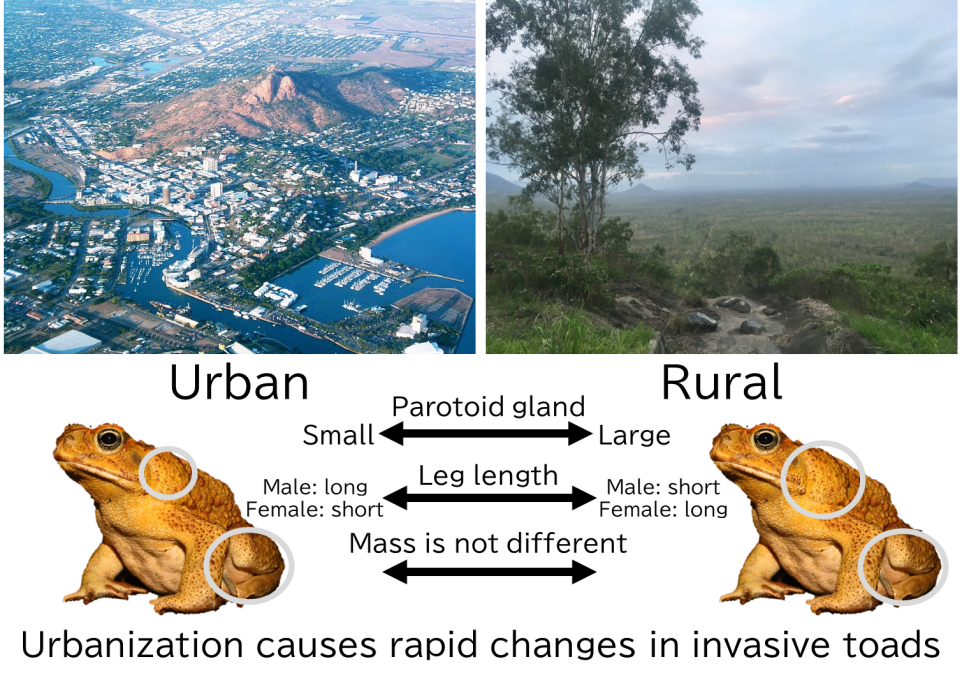 ▲Parotoid gland sizes of urban populations were significantly smaller than those in rural populations, whereas body mass did not differ. Leg lengths of urban males were longer than those of rural males, but urban females had shorter legs than rural females. These results demonstrate that urbanization causes morphological changes in invasive toads.

Biodiversity is increasingly diminished by humanity’s many impacts, a major aspect of which is urbanization. Although there are a lot of studies reporting that urbanization influences wildlife population sizes and distributions, we are only beginning to study urbanization as an evolutionary force. Urban environments are also hotspots for invasive species, i.e., species that are not indigenous, or native, to an area, which can cause significant economic and ecological damage. In addition, invasive species provide an evolutionary laboratory in which we can study the effects of urbanization.

Cane toads are invasive in Australia, and Assistant Professor Hirotaka Komine with the Tokyo University of Agriculture and Technology (Current affiliation: Yamagata University) along with colleagues from Australia’s James Cook University, wanted to find out whether the urban environment had impacts on the morphology of these toads. They hypothesized that toads may have fewer predators in urban environments compared to ‘country’ or peri-urban environments, and that this may mean that urban toad antipredator defences were less well developed.

They published their findings on 2 September 2022 in Biological Journal of the Linnean Society.

They captured 419 adult toads in 3 Queensland Australian towns: Townsville, Cairns and Mackay, within city limits, and then ventured to surrounding rural areas of each city. They measured these toads’ parotoid glands, which contain strong toxins for anti-predator defense, as well as leg length and mass.

The researchers found parotoid gland sizes were significantly smaller in urban toads compared to those in rural populations, although body mass was not different. Interestingly, leg lengths of urban males were longer than those of rural males, but the legs of urban females were shorter than rural females. Thus, urbanization caused reduced anti-predator defenses in invasive toads, and also increased sexual dimorphism in leg length. Invasive toads were introduced to Australia in 1935, so these morphological changes may have occurred rapidly. Without genetic work, we do not know if these changes are a phenotypically plastic response, or genetically encoded, but in either case they seem adaptive.

The researchers added that further studies are needed to reveal the underlying mechanism driving these morphological changes and to clarify whether these changes were evolutionary or phenotypic changes.