168 New Geoglyphs Discovered on the Nasca Pampa and Surrounding Areas

168 New Geoglyphs Discovered on the Nasca Pampa and Surrounding Areas 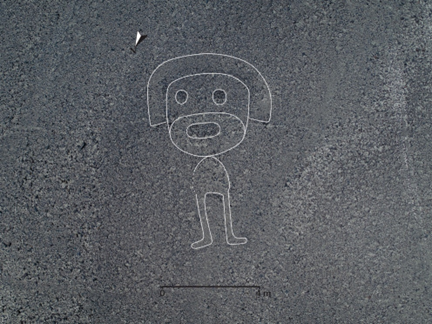 A research group led by Professor Masato Sakai, (Yamagata University, Cultural Anthropology and Andean Archaeology), in collaboration with Peruvian archaeologist Jorge Olano, has discovered 168 new geoglyphs of humans, camelids, birds, killer whales, felines, and snakes on the Nasca Pampa and near the city of Nasca. These were discovered through field surveys (June 2019-February 2020) utilizing aerial photos and drones. The geoglyphs are thought to date between 100 BC and AD 300. As many as 36 of these geoglyphs were discovered in the Aja area, near the city of Nasca. The discovery of 41 geoglyphs in this area was previously announced by Yamagata University in 2014 and 2015, which led to the creation of an archaeological park in 2017 in collaboration with the Peruvian Ministry of Culture to protect them. With this discovery, a total of 77 geoglyphs are now known to be concentrated in this archaeological park. The results of this research will be applied to future AI-based surveys of the distribution of Nasca Geoglyphs and their protection.

Field surveys using high-resolution aerial photos, and drone images (from June 2019 to February 2020) led to the discovery of 168 geoglyphs, including animals and humans, on the Nasca Pampa and near the city of Nasca. Adding the newly discovered 168 geoglyphs to the 190 geoglyphs discovered until 2018 results in a total of 358 geoglyphs. The geoglyphs discovered include humans, camelids, birds, orcas, felines, and snakes. These geoglyphs were created by removing black stones from the surface of the earth to expose a white sandy surface below. Current research suggests that there are two types of geoglyphs: a linear type and a relief type. Of the geoglyphs discovered in this study, only five are of the former type, while 163 are of the latter type. Most of the geoglyphs of the latter type are small, less than 10 meters in diameter, and are mostly distributed along ancient trails.