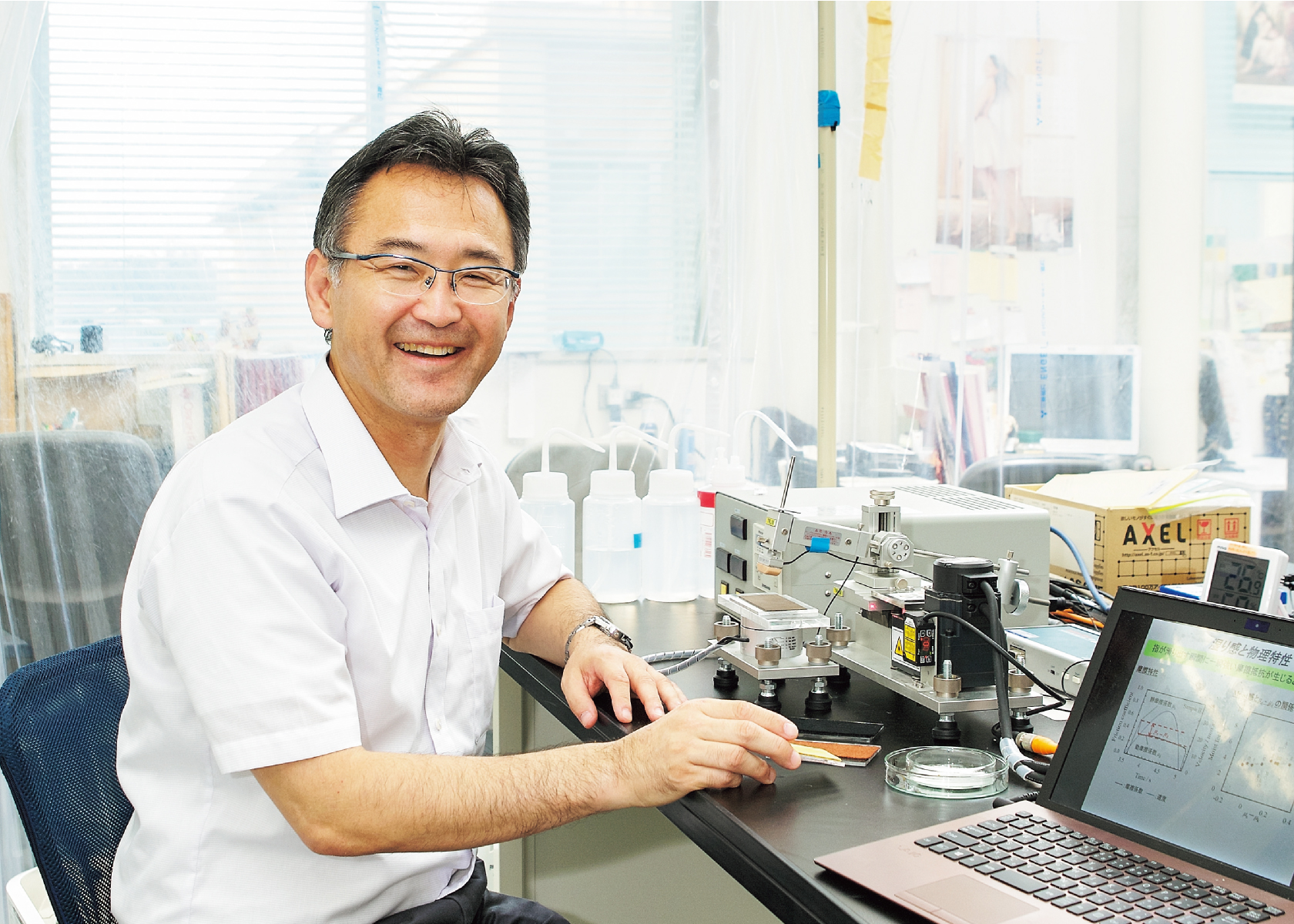 What people sense when they touch something—sensations like smoothness, stickiness and moistness—differs from person to person, and this is a vague, unclear psychological phenomenon. In particular, "shittori" (moistness, or softness) is a strange sensation that is difficult to express in English and other languages. Professor NONOMURA Yoshimune's research group developed original devices to assess friction, and successfully clarified the physical mechanisms behind "shittori." It is expected that these research results will be applied in various fields, such as cosmetics, automobiles, clothing, and virtual reality.

Focusing on "Shittori," which is valued in cosmetics and fibers, and working to shed light on it

Prof. Nonomura, who spent over a decade working as a researcher at a cosmetics company, leverages that experience to teach what is possibly the only Cosmetic Science course offered at a national university. As part of cosmetics development, he assessed how it felt to apply creams and powders, and how they felt to the touch. His interest in the sensation of touch increased, which led to him taking up a position as a university researcher.

Prof. Nonomura is particularly interested in the sensation of "shittori," which is valued in cosmetics and fibers. According to the dictionary, "shittori" is defined as "the state of being damp, having moderate moisture," but he took notice of the fact that material like cloth and real leather, which do not contain liquid, also has a feeling of "shittori." Furthermore, even though the word is commonly used in Japanese, it does not even have an equivalent word in other languages, including English, which sparked his motivation to research it.

In Prof. Nonomura's lab, through collaborative research with people like Professor Maki Sakamoto of the University of Electro-Communications, he set out to clarify the physical mechanism behind the psychological phenomenon of something feeling "shittori."  First, with 20 young women, who are said to have the most acute senses, as the subjects (from the university, between 20 and 25 years of age), he conducted sensory evaluations of the "shittori" feeling of twelve different kinds of material, such as cosmetics powder, synthetic leather, rubber, and metal. As a result, cosmetics powder, which is the base ingredient for foundation, had the most "shittori" feeling. He revealed that combining the feelings of "dampness" and "smoothness" is recognized as "shittori." Furthermore, with regard to the word "shittori," he examined the word's phonetic characteristics, such as its consonant and vowel types and the presence or absence of voiced sounds, and applied them to a database that examined onomatopoeic impressions in 52 words. After measuring those impressions, it was confirmed that they were also connected phonetically to "dampness," "smoothness" and "coolness." 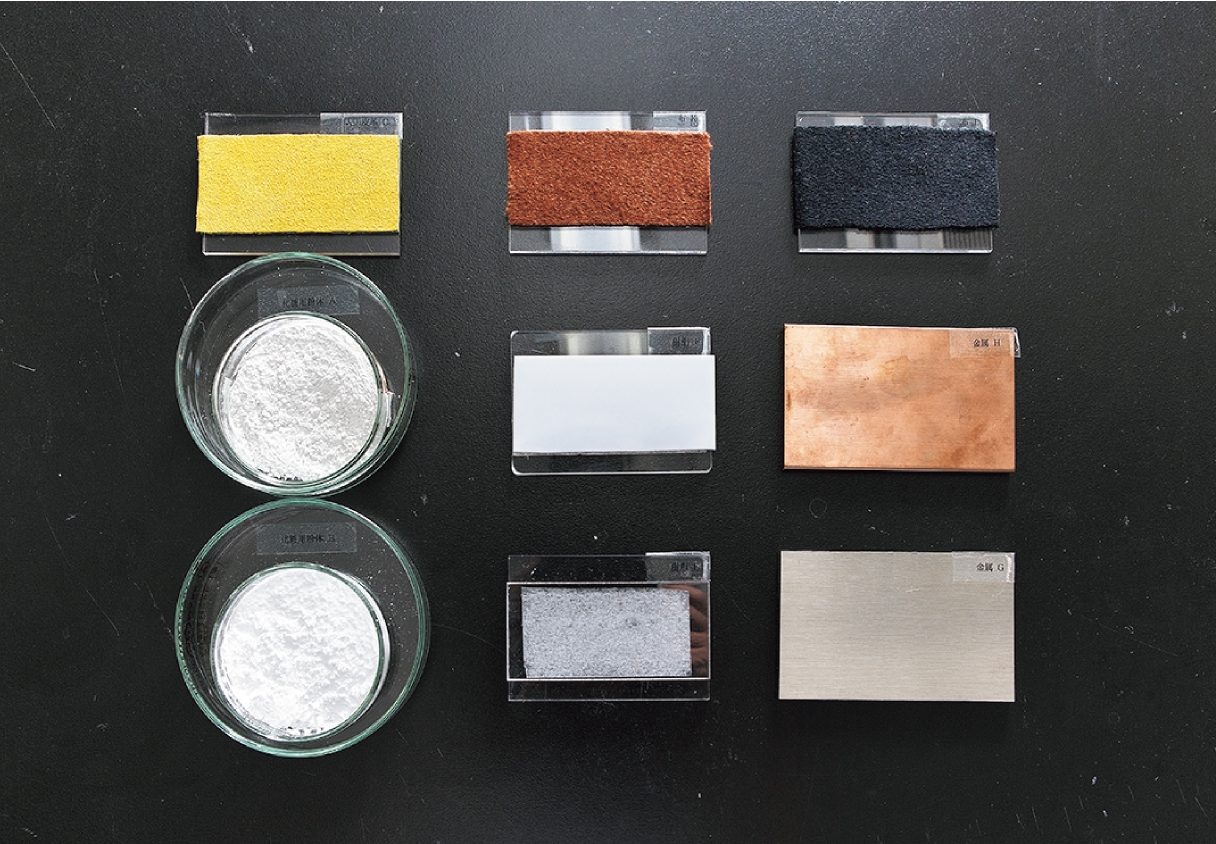 Various materials, such as cosmetics powder, resin, synthetic leather, metal and cloth, the subject of sensory evaluations for the feeling of "shittori." Young women with particularly acute senses and a biomimetic touch sensing system both evaluated the same materials.

Next, in order to clarify how these feelings of dampness and smoothness are expressed through physical stimuli, Prof. Nonomura developed a friction assessment device, an original "biomimetic tactile sensing system" which recreates a finger's smooth movements. In the part of the system that comes into contact with the material to be assessed, he developed a finger model that imitates the structure, hardness and surface properties of a human finger in order to model the mechanical phenomena applied to the skin's surface. Just like the sensory evaluations by the women, he gathered and analyzed all sorts of data regarding 12 kinds of material, including their friction properties, thermophysical properties, mechanical properties and surface shape. From those analyses, he learned that the larger the gap in size between the starting and subsequent friction resistance, the stronger the feeling of dampness, and the more sudden the decrease in friction resistance, the stronger the feeling of smoothness. He found that the feeling of "shittori" is roused by this two-stage physical phenomenon.

The Sican emerged centering on a religious leader and prospered around AD 950-1100 based on fishery, large-scale irrigation agriculture, highly elaborate metallurgy, and long-distance trade. Huacas de Sican, where the above excavations took place, is thought to have been the first capital during the most prosperous times. Its core area consists of over a dozen pyramidal mound structures surrounding a large rectangular space called Great Plaza (Figure 1). Four excavation units were set up in line between two of those mound structures, Huaca Loro and Huaca Las Ventanas.

During the excavations, the research team meticulously documented and observed deep stratigraphic layers reaching about 5m below the present-day surface (Pic.1), in which they found some vestiges of floods and associated ritual activities including the sacrifices of 10 human bodies (Pic.2). These findings may suggest that the Sican fought against the social unrest triggered by the climatic changes through ritual sacrifices of their people and that the capital was not abandoned after the climatic changes.

Furthermore, the research team also found a tomb as well as a number of grave offerings in the middle the Great Plaza (Pic.3). Interestingly, the body was interred in the burial style of the preceding Mochica culture. This discovery suggests the concomitance of the multiple ethnicities in a single society, which is usually considered very difficult to prove by archaeological means.

The research team will carry out a thorough investigation into the interrelations between floods and social changes by addressing the corresponding soil layers deposited before, during, and after the floods. The team is also interested in implementing a comparative study with the research team led by the professor Masato Sakai who has been conducting his research in the Nasca area on the Peruvian south coast. 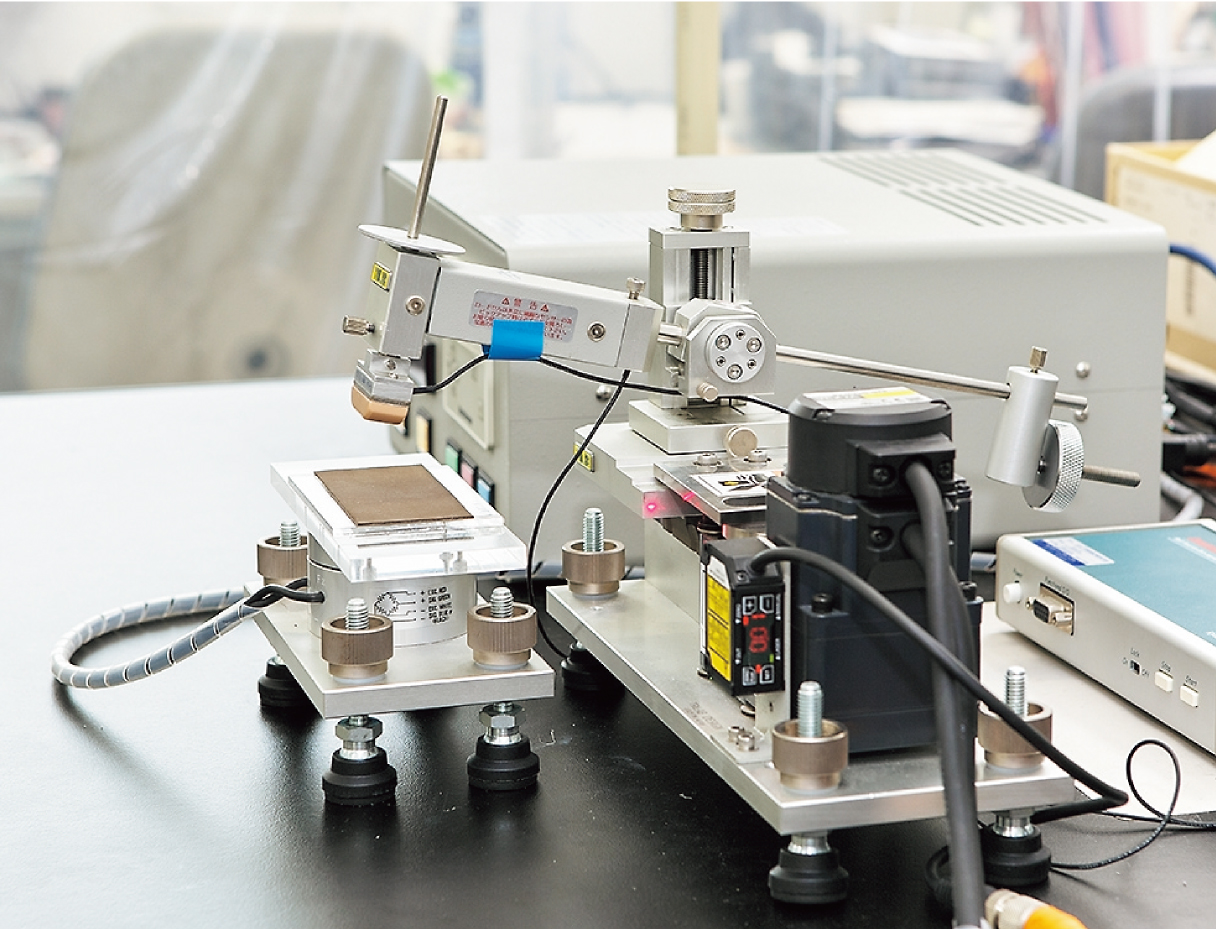 The biomimetic tactile sensing system, which Prof. Nonomura worked on in his lab, is the only friction assessment device in the world. By recreating the smooth motion of a finger, he can measure the physical stimuli applied to skin when people touch things. 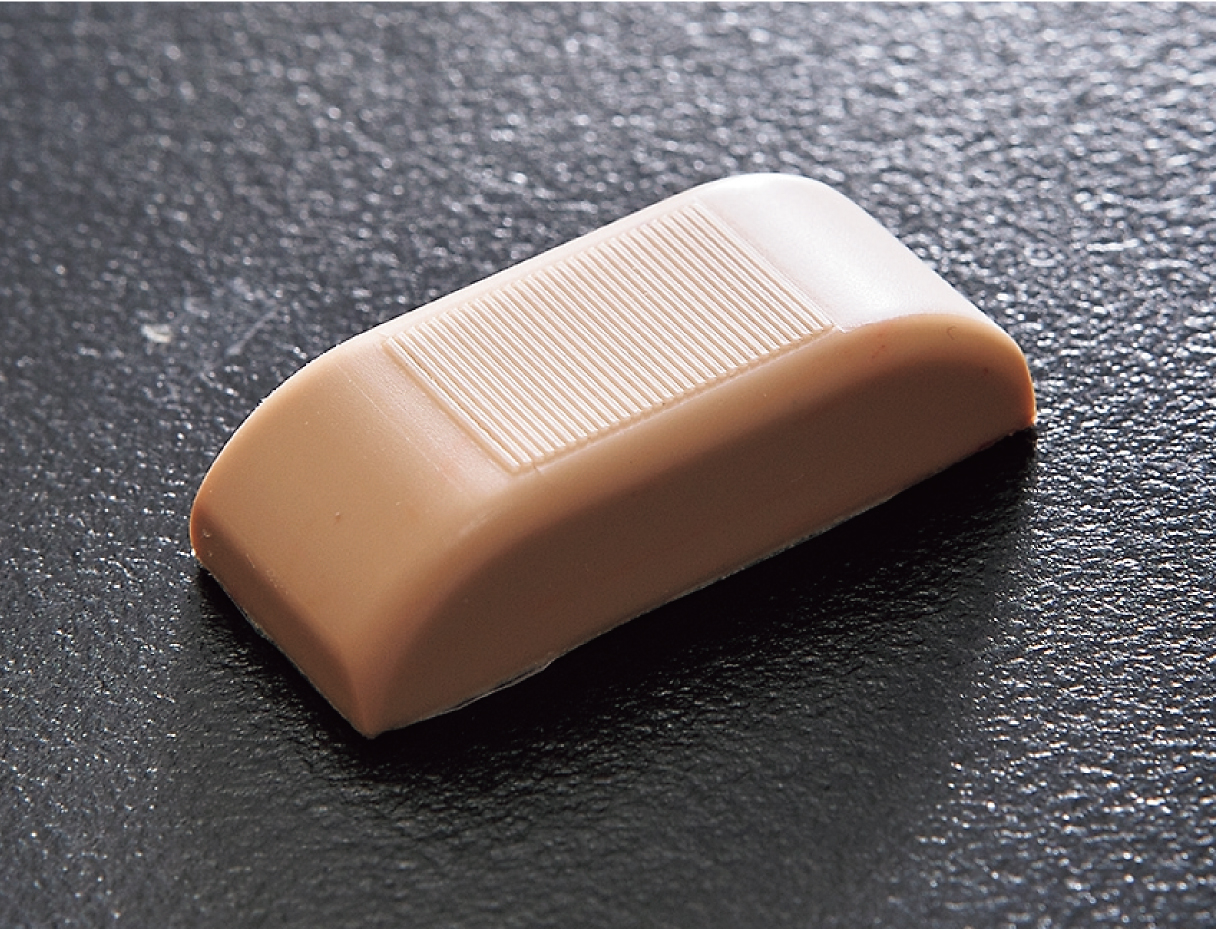 ▲A finger model used for a friction stimulation experiment

The finger model, used in the biomimetic touch sensing system's segment that comes in contact with things, is an original by the Nonomura lab. The main material is urethane. It replicates the structure, hardness and surface properties of a person's finger, and is put to use for various purposes.

Sending "shittori" tactile sensations overseas, with an eye towards applying them in VR and robotics

Prof. Nonomura published these research results at the end of 2018 in a British science journal, Royal Society Open Science. In the UK, the concept of "shittori" is difficult to convey. Validating the research was difficult and the review took time, but it was published online as of July 10, 2019 (local time). Due to that publication, it received reactions from Japan, the UK, China, Sweden and other countries. In the future, Prof. Nonomura plans to tackle clarifying feelings of "warmth" and "silkiness." Clarification of the physical mechanisms of such tactile sensations does not just have scientific value, but great engineering value, as well. It is already being applied to the development of high-quality cosmetics, fibers, and automotive materials, and joint research with other universities and companies is moving forward with regard to applications for more realistic virtual reality and tactile humanoid robots.

By taking the delicate tactile sense possessed by Japanese people and the Japanese language, turning it into data and making it visible, "shittori" seems to be becoming a common language like "kawaii" and "emoji." 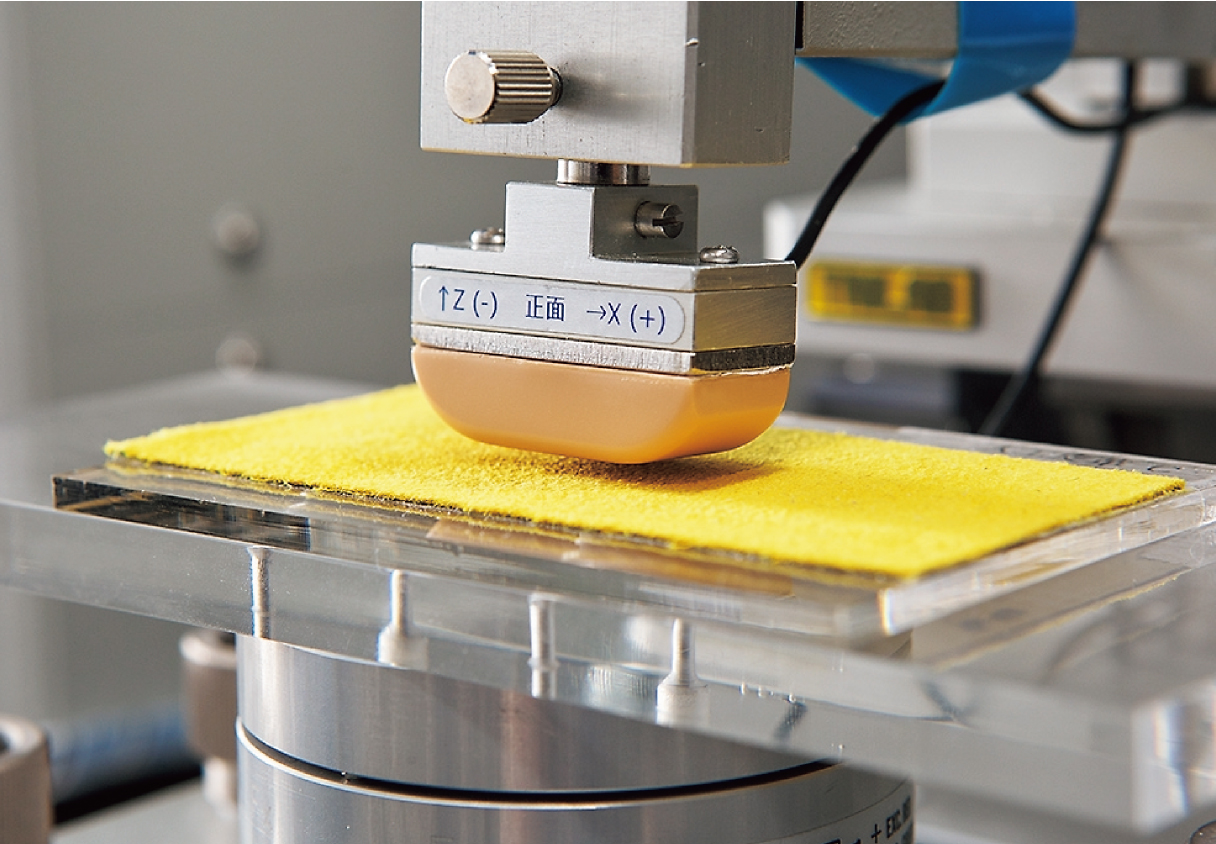 A close-up of the moving parts of the biomimetic touch sensing system. By smoothly moving an elaborate finger model along the object to be assessed, it is possible to measure the object's friction properties, thermophysical properties, mechanical properties, surface shape, water content and other properties.

Specializes in biochemical engineering. Completed his doctoral course at Keio University Graduate School, and obtained his Ph.D. in Engineering. After working at Kao Corporation, took up a post at Yamagata University in 2007. Attracting attention for his clarification of the mechanism that controls the feeling of "shittori."