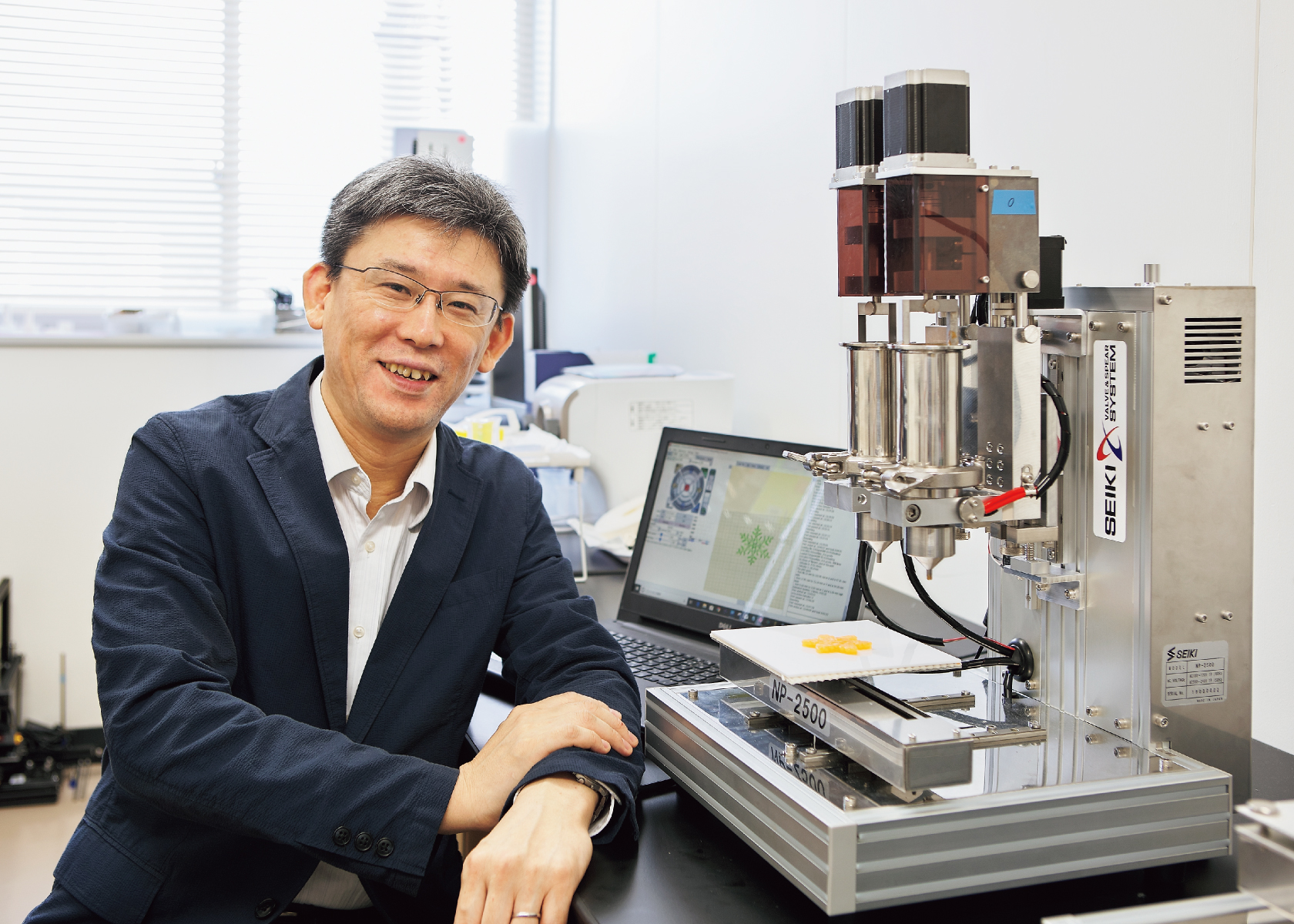 The creation of new industries and revolutionary technology that uses 3D printers is remarkable these days. The research theme proposed by Associate Professor KAWAKAMI Masaru, developing production technology for soft food which can design the food's shape and texture, was selected for the Japan Science and Technology Agency's JST-Mirai program (small start type) in fiscal year 2018. As the aging of society accelerates, research that aims to improve the quality of elderly people's diets and lead to a lighter burden on nursing care personnel by using 3D printers is garnering strong attention from overseas, as well as from within Japan.

From "Kawakami models" to nursing care food, discovering the potential of 3D printers and entering a new field.

Prof. Kawakami had originally specialized in chemistry and carried out research on topics like proteins. 3D printers were supposed to be unrelated to his field of study, but as he continued chemistry research and tackled the development of effective methods and measures, he came to feel that color 3D printers had major potential. Because proteins have complicated structures, and it is difficult to imagine them in three dimensions in an intuitive way, he developed a method to build molecular models of proteins using color 3D printers. Those models, called "Kawakami models," are known as familiar teaching tools in classrooms and laboratories around the world. Afterward, due in part to his love of building things, he steadily placed more weight on research related to 3D printers, and this led to him joining Yamagata University, where 3D gel printer research is thriving.

At present, as a researcher at the Soft and Wet Matter Engineering Lab (SWEL), Prof. Kawakami is tackling the development of internal organ models as a successor to molecular models, and also working on new models using material (gel) that is closer to biomaterial. Furthermore, focusing on the fact that food is also gel, Prof. Kawakami developed a food printer that cleanly builds up soft food through collaborative research with local companies. While the food printer—which prints people's food in their preferred shape in 3D, right before their eyes—was lauded for its noteworthiness and topicality, it was not cost-effective enough to be practical, and was not supported by food companies. However, nursing care food companies expressed interest in the "soft food" aspect. 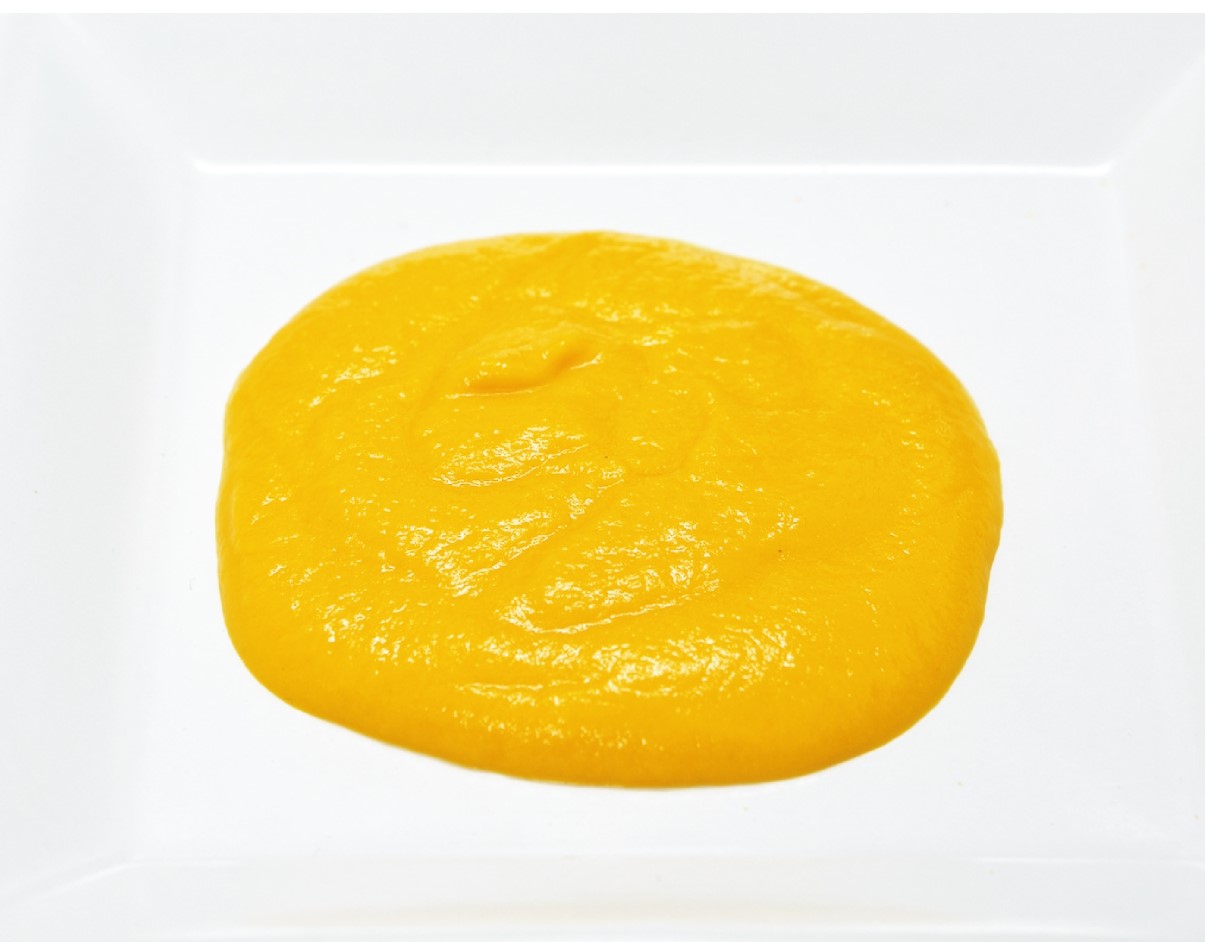 ▲In Japan, major food companies have also entered the nursing care food business, and there is actually an abundance of varieties on the market, but many of those products are in paste form. From looking at the paste, it's difficult to feel that people would enjoy eating it. 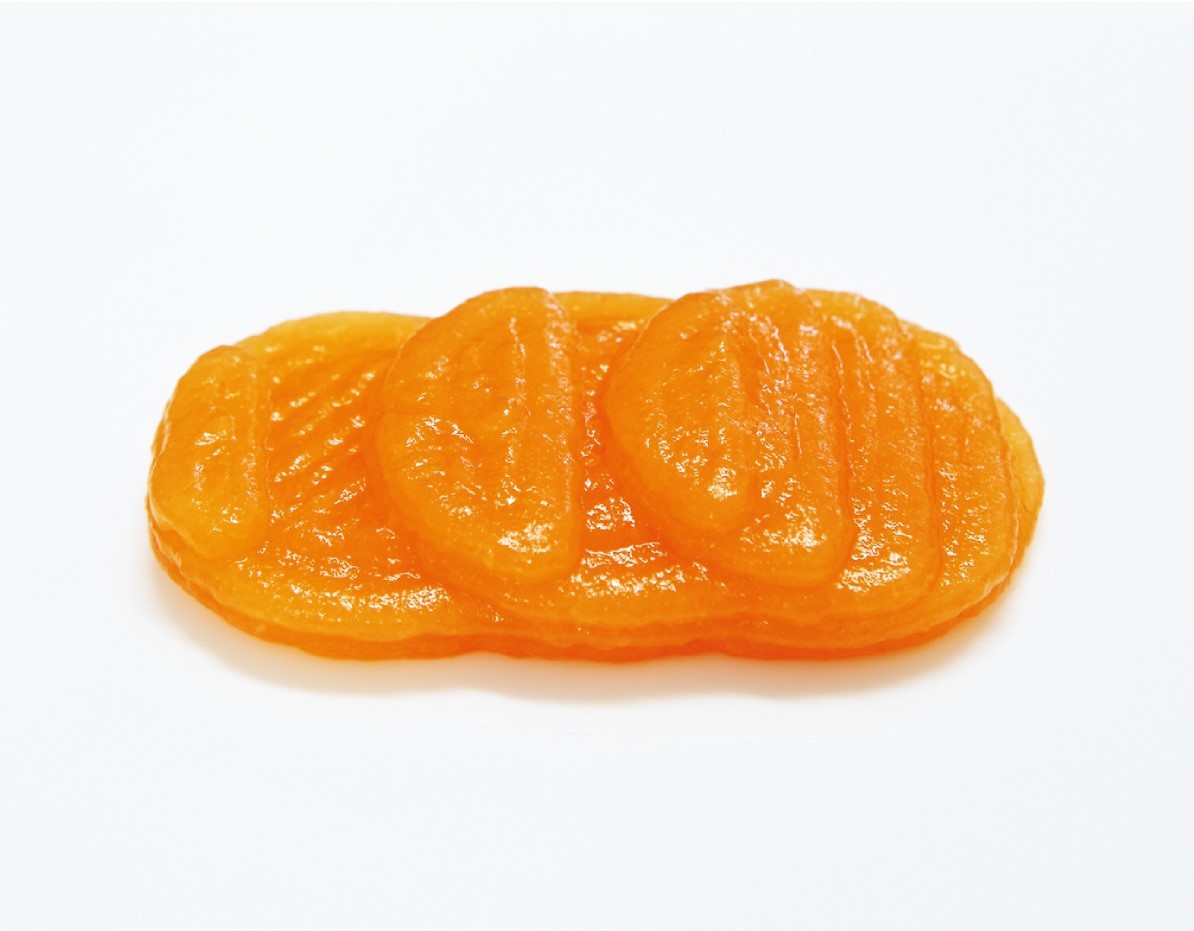 ▲Nursing care food made from carrots in paste form, shaped by a 3D printer. At a glance, it looks like a stack of round carrot slices. It recreates an appetizing shape while remaining easy to eat.

Nursing care food that looks and tastes good, making it fun to eat and reducing workload.

Looking at the rest of the world, Japan is a nation with a serious aging issue. Because of those circumstances, Japan is ahead of other countries with regard to the development and creation of nursing care food for people who have a weakened ability to chew and swallow food. Major food companies have entered the market and there is a diverse selection of nursing care food available, but most products are in the form of thick pastes. While they are highly nutritious and safe, it is difficult to say that they have an appetizing appearance and texture. Using 3D printers, Prof. Kawakami's research team aims to create nursing care food whose texture and appearance is close to the original food. For example, by extruding carrots in paste form via a small metal nozzle and piling the paste up into several layers in one continuous stroke, it is possible to make soft food that looks like an arrangement of round carrot slices. Furthermore, by using multiple nozzles, it is possible to combine materials that have different firmness and flavors and give the food variations in color and chewiness. Prof. Kawakami says, "In the future, I'd like 3D printers to become mainstream in nursing care facilities and homes, so that people can easily make nursing care food in accordance with each individual's preferences and physical state."

As research and development that is expected to practically contribute to QOL (Quality of Life) improvements for elderly diets and lead to a reduced burden on caregivers, this research was selected for the Japan Science and Technology Agency's JST-Mirai program (small start type) in fiscal year 2018.

On the nursing care food market, an inevitable expansion of needs, and the bright future of food in a graying society.

This project, in research collaboration with a Tokyo food company and an injection mold manufacturing company in local Yonezawa City, receives their cooperation for the development and provision of various materials and the construction of equipment. The future role of Prof. Kawakami's research team is to improve the precision of the 3D printer system itself and aim to give it a robust menu, and also gather and accumulate various types of data. Nursing care food needs to be soft, but if 3D-printed objects are soft, they crumble easily. The team measures the softness, viscosity, temperature, ejection speed from nozzles, and other factors for suitable ingredients that resolve this contradiction, and then converts that information into data. Furthermore, it is also important to have elderly people taste-test the food, and survey them about things like the food's taste and texture, as well as their impressions. The team gets feedback from those results, which leads to better 3D printers. They also plan to build mockups (life-size models) to make it easy to envision scenarios where 3D food printers take their place with other electrical appliances in nursing care facilities and households.

It is a certainty that the market for nursing care food is going to expand, and transition into an era where the food will need to provide enjoyment in addition to nutrient intake. 3D food printers will be able to easily customize delicious and visually appealing nursing care food, in accordance with each elderly person's preferences and physical condition. Coupled with the global boom in Japanese food, it is possible that this could be a precursor to overseas expansion. The completion and spread of 3D food printers, which offer a cheerful topic through the familiar realm of "food" in an aging society with many issues, will be highly anticipated. 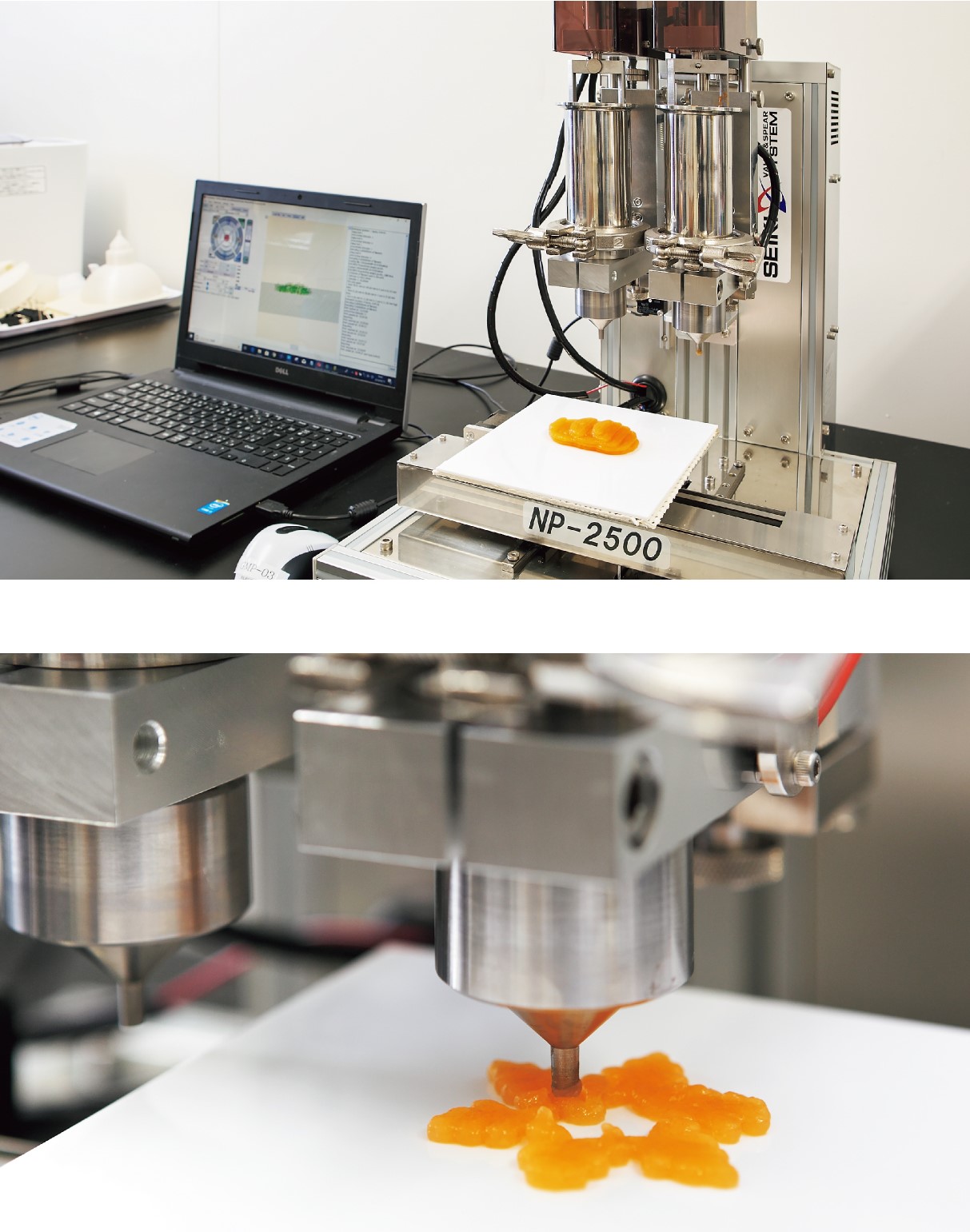 ▲3D food printer test device
A snowflake blueprint, created in CAD, is entered into the computer. The carrot paste is fed into the nozzle, and the process begins. The receptacle below the metal nozzle moves bit by bit, and a snowflake is created right before one's eyes. 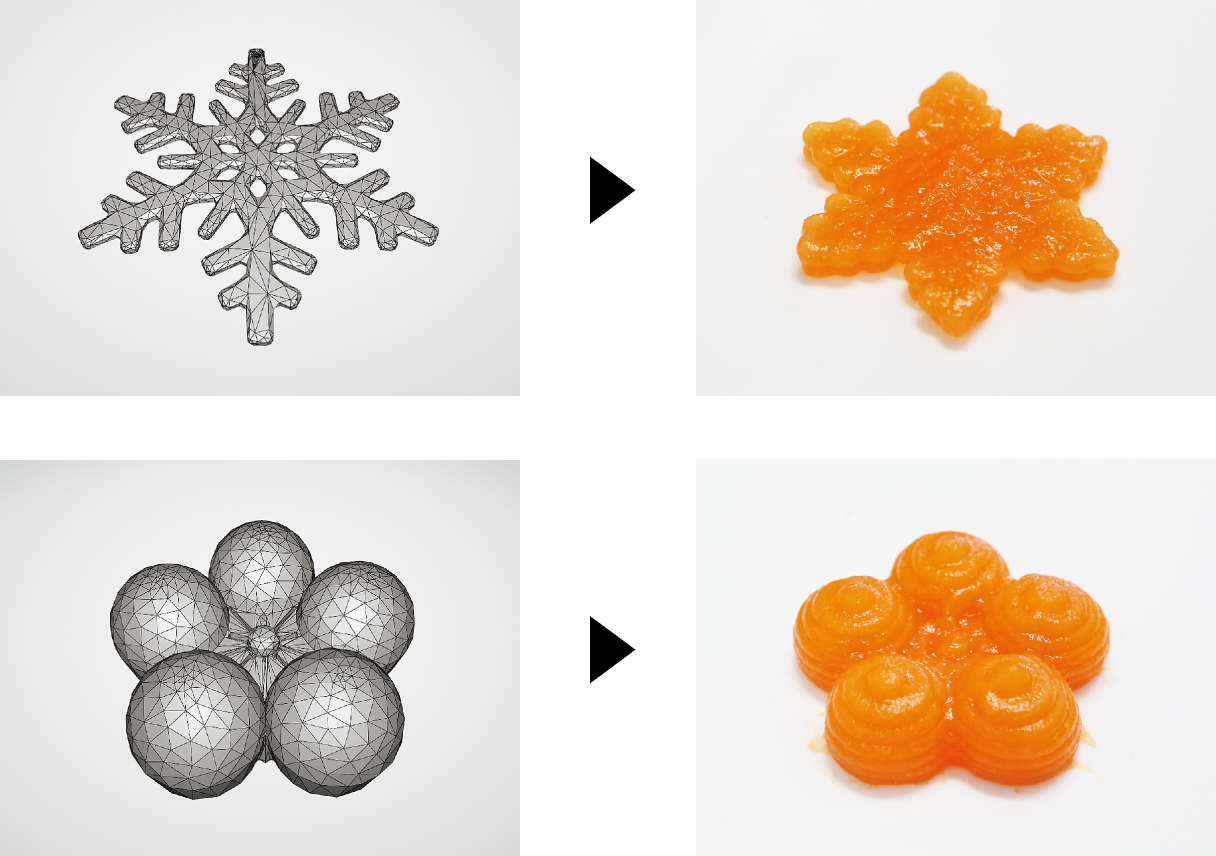 ▲Nursing care food shapes can be freely created, just by entering blueprints created in CAD or other software. By feeding different ingredients and material with different viscosity into the two nozzles, it is also possible to give the food variations in flavor and texture.

Specializes in biophysics and structural biology. Finished his phD at Kobe University . Had an early interest in 3D printers and developed a method to build molecular models of proteins. Currently researching applications of 3D printing for nursing care food. Took up his position at Yamagata University in 2014.