TSUNEMATSU Kae - The mystery of volcanic eruptions: from mechanisms to disaster mitigations. 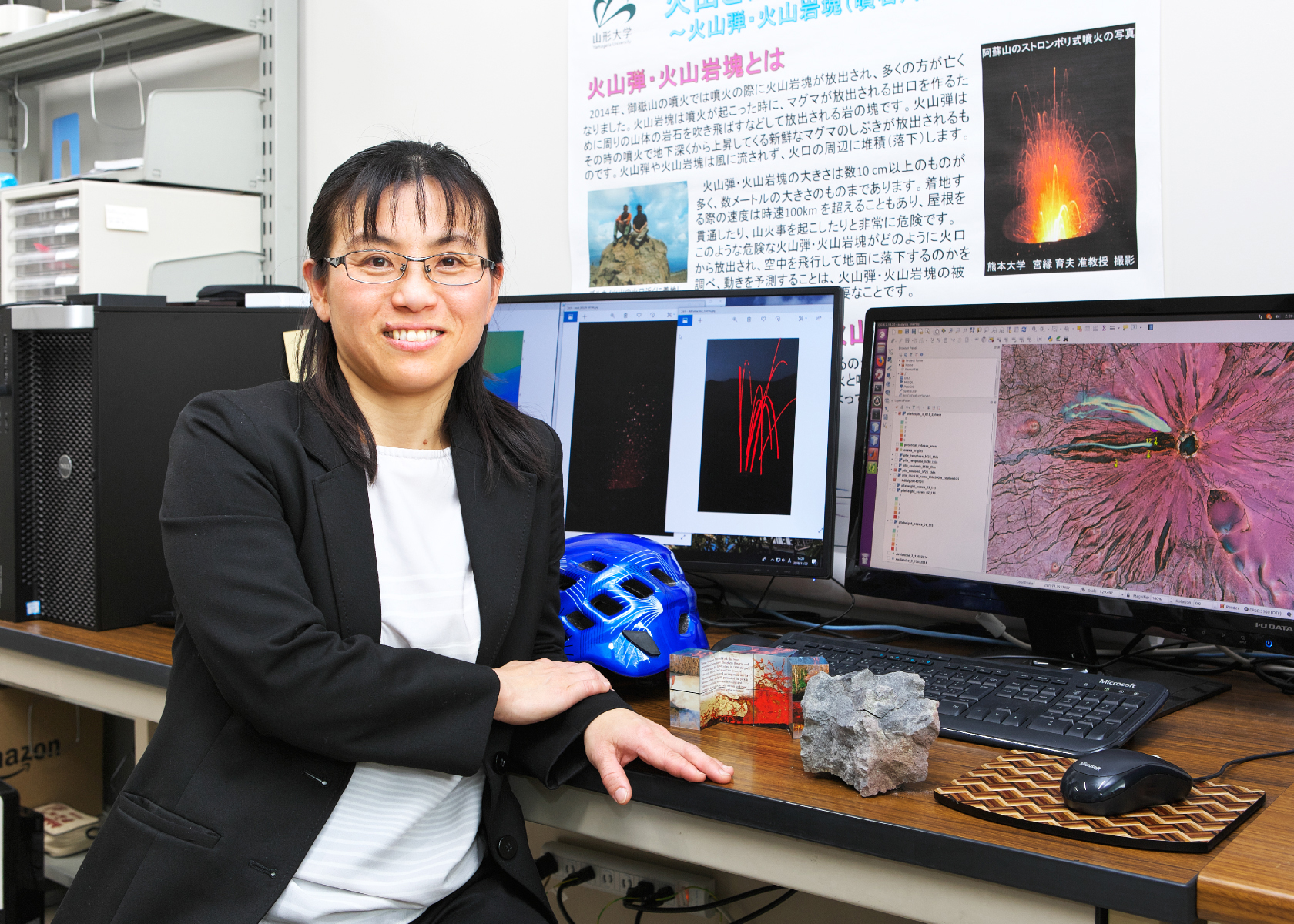 "Why do volcanic eruptions occur?" From an early age, Associate Professor TSUNEMATSU Kae was interested in volcanoes, conducting independent research on them while she was still in elementary school. The desire for discovery became even stronger in junior high school, high school and university, culminating in a doctoral degree from the graduate school of the University of Geneva in Switzerland. After working at places like the Mount Fuji Research Institute, she took up a position at Yamagata University in 2018. There are many volcanoes in Yamagata Prefecture, so she hopes to make a major contribution to regional geology through her academic research, and to propose disaster prevention measures to the local government.

A single-minded desire for discovery since elementary school, pursuing active volcanoes around the world

Originally from Yokohama city in Kanagawa Prefecture, Kae was affected by the Izu-Oshima volcanic eruptions and undersea volcanic eruptions off the Izu Peninsula that occurred when she was an elementary school student. From a young age, she had been extraordinarily interested in volcanoes, to the point that she considered the simple question, "Why do volcanoes erupt?" and summarized it in an independent research project. Afterwards, she never lost interest in volcanoes, reading books by people who conducted continued observations of the Showa-Shinzan lava dome, and going to university to pursue Earth Sciences. Through various encounters and experiences when she was a student, from taking a solo trip to Showa-Shinzan to training at the Usu Volcano Observatory of Hokkaido University, her interest in volcano research gained even more steam, so she decided to enter graduate school. After she completed her Masters, she began working for a computer company as a systems engineer, but decided to continue conducting volcano research, and so did a Ph.D. at the University of Geneva. She now studies active volcanoes all across the world, including the Cotopaxi volcano in Ecuador, the Kilauea volcano in Hawaii and the Suwanosejima volcano in Kagoshima Prefecture.

Also, since 2016, before she came to Yamagata University, she has been involved in the Integrated Program for Next Generation Volcano Research and Human Resource Development, which is operated by the Ministry of Education, Culture, Sports, Science and Technology and was constructed with the aim of contributing to the prevention of volcano disasters. Established after the Mt. Ontake disaster in 2014 to boost the standards of volcano research and train human resources, it is a ten-year project with universities and research institutes from all over Japan participating. 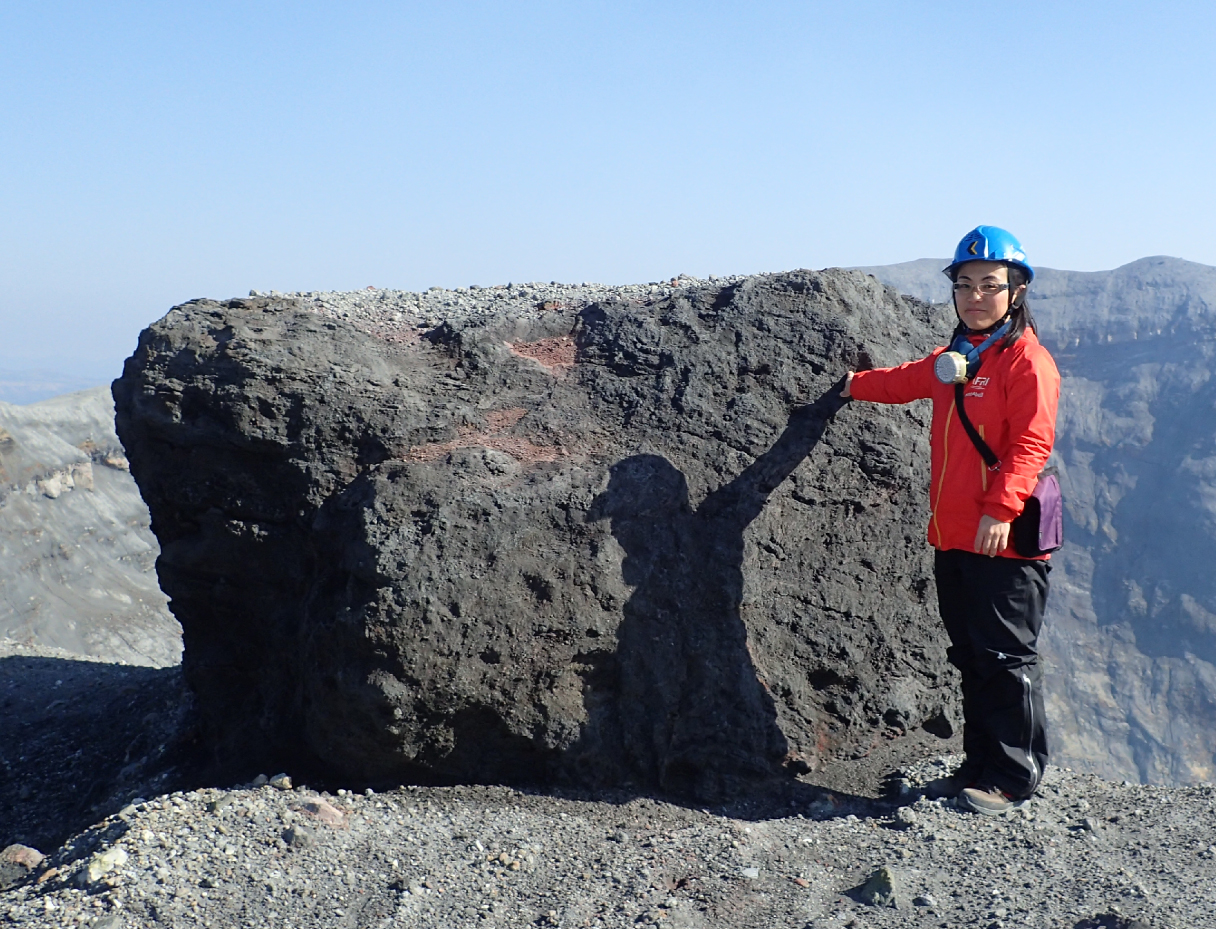 ▲At Mt. Aso in 2017, surveying the spatial distribution of volcanic blocks that were ejected from a phreatic eruption in 2016. Rocks larger than people were seen on the crater wall. 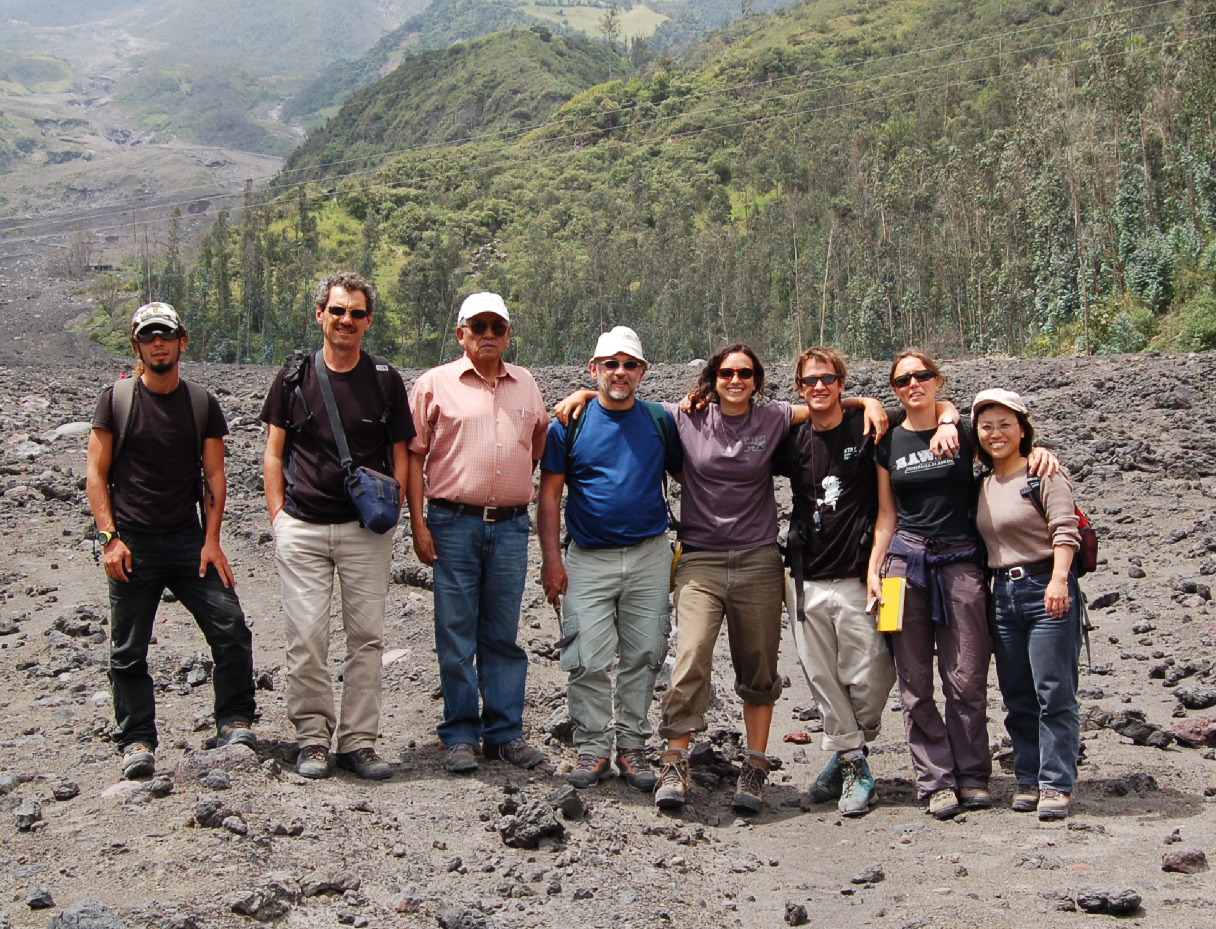 ▲A group photo taken during a field survey of the Cotopaxi volcano in Ecuador during Kae’s time in the graduate school at the University of Geneva. The group was examining the extent of the volcanic ash cover, analyzing the grain-size distribution, and investigating how volcanic ash is transported into the atmosphere. 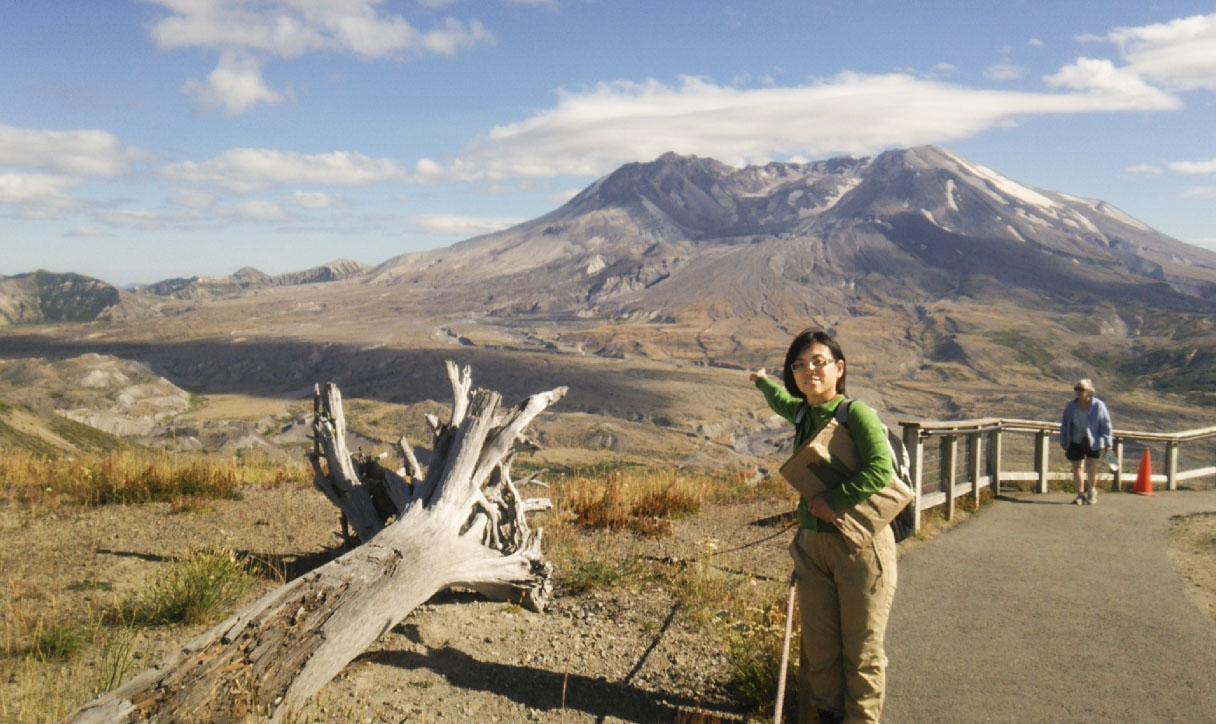 ▲Paying a visit to Mt. St. Helens in the USA during a conference tour in 2017. Due to an eruption in 1980, there was a major collapse of part of the volcanic edifice. The traces of the collapse can be seen where Kae’s finger is pointing, and the hollow section has now formed a lava dome. The fallen tree was blown over by the blast of the eruption.

Volcano research covers a broad range of topics, from the phenomena of volcanic eruptions themselves to pyroclasts, lahars, lava flows, and volcanic ashes. Kae's research is focused on volcanic eruptions as a whole, but in particular, she is interested in researching pyroclasts, commonly known as ballistic projectiles, over 10 cm in size. There are two kinds of ballistic projectiles in volcanology: magma that gushes out of the volcanic crater when it erupts, then solidifies (volcanic bombs), and fragments of the rocks that form the volcanic edifice (volcanic blocks). She clarifies the mechanisms of transport of volcanic bombs and blocks, using image analysis technology and numerical models on traces of past eruptions and other data. Applying those results as input parameters to run simulations is useful for disaster mitigation measures, such as creating and revising hazard maps.

In recent years, due to the damage caused by the eruption of Mt. Ontake and the increased activity of Mt. Shinmoedake, the importance of measures to mitigate disasters is being re-considered. Since the direction of ballistics and travel distance changes according to the shape and location of the eruption crater and weather conditions, the method up to now, which predicts travel distance and uniformly determines no-entry zones as a simple circle, cannot be called infallible. More accurate simulations are necessary. With this in mind, Kae has conducted field surveys at Mt. Ontake in 2015, the year after the eruption, and through her research, estimated ejection speed and other factors, which she says improved her simulator to include terrain effects. She warns that people should be aware that ballistic projectiles could be ejected at any time and in any direction when an explosive eruption occurs.

▲Mt. Ontake, where field surveys were carried out in 2015. Left: The place known as "Haccho Darumi". It is believed that many victims perished at the "Statue of Devotion (Magokoro-No-To)", which can be seen at the back. Right: A survey being carried out on ballistic blocks that were ejected during the eruption. 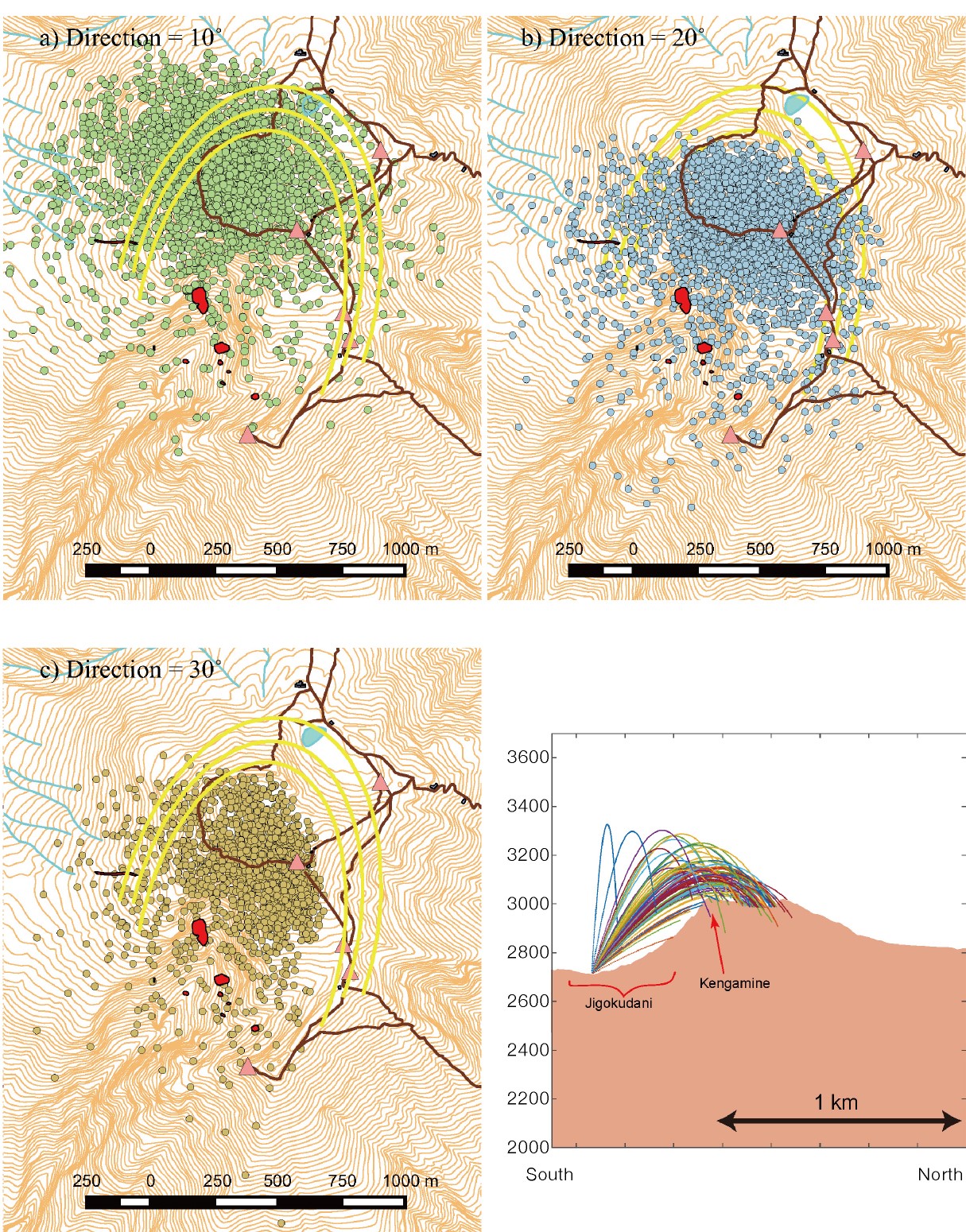 ▲Simulated distributions of deposited blocks with rotation angles of (a) 10 degrees, (b) 20 degrees, and (c) 30 degrees, based on the Mt. Ontake 2014 eruption. Using aerial photos, the distribution of impact craters created by ballistic blocks was compared to the simulations. Lower Right: a diagram showing the simulated trajectories of ballistic blocks. Many of the blocks ejected from the Jigokudani crater, which was formed during the eruption, landed on Kengamine, the summit of Mt. Ontake (Tsunematsu et al., 2016).

Kae says, "In a mysterious way, volcanic eruptions are both beautiful and scary, but volcano research is fascinating because it involves various fields of study, like geology and physics". Since Japan is a chain of volcanic islands at the edge of a subducting plate, it has to be accepted that volcanic eruptions and earthquakes are natural phenomena. That is why disaster preparation is essential. However, volcano researchers, who can supply vital predictions and knowledge on this subject are in short supply. To provide inspiration to her students, she wants to attend at least one international conference every year, and highlight her survey activities and approach to actively tackling research. In her classes, she wants to use her enthusiasm to appeal to the students and make them more interested in volcano research.

Yamagata Prefecture is a region with many active volcanoes, so Kae wants to examine the state of the mountains in the area, and visit Azuma volcano and Zao volcano to conduct field surveys. In Yamagata University, where Kae now works, some of the faculty members specialize in volcanology, geology and petrology. So with their experience and advice, Kae hopes to work together with them to create hazard maps in coordination with the Japan Meteorological Agency, and to contribute to the region in terms of disaster prevention. While it is impossible to prevent volcanic eruptions, it is possible to minimize their damage. To support communities living near active volcanoes, the challenges facing volcano researchers will only continue to grow.

Kae is from Kanagawa Prefecture and received her Ph.D. from the Section of Earth and Environmental Sciences at the University of Geneva, Switzerland. She took up her post in Yamagata University in April 2018, specializing in volcanoes and geophysics, and conducts research on active volcanoes inside and outside Japan, including Mt. Ontake. Currently, she is also conducting surveys on active volcanoes in Yamagata.