Home > Research > Research Highlights > Other fields > MIWA Iku - Invigorated by the abundance and beauty of nature, teaching and playing music with gusto.

MIWA Iku - Invigorated by the abundance and beauty of nature, teaching and playing music with gusto. 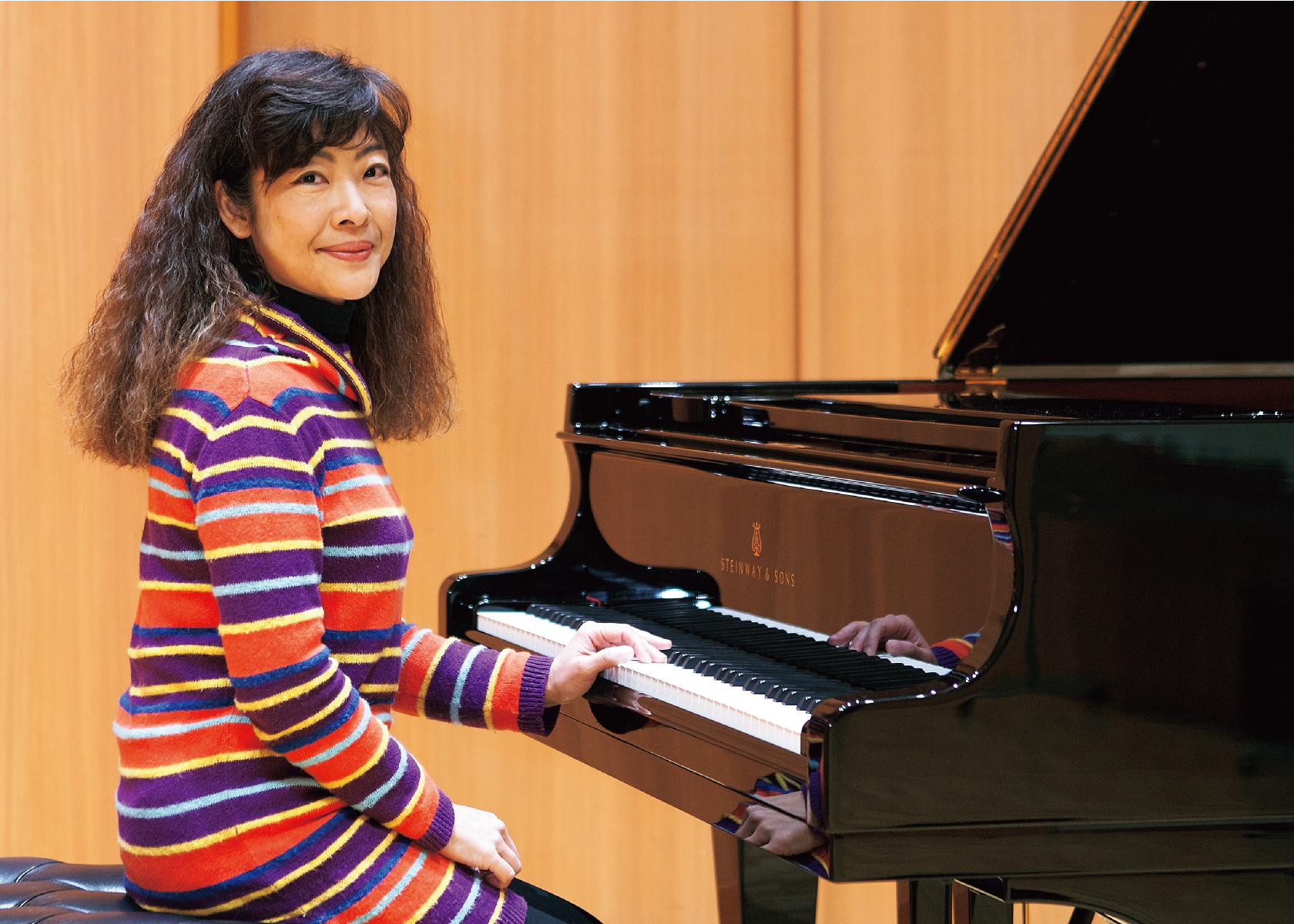 Professor Miwa Iku, who was raised in a blessed musical environment of a family of musicians, had a gift: she sang songs before she could speak words. She has won numerous international piano competitions, and she is very trusted in a musical sense through her performances with concertmasters and principal playersin  orchestras, both in Japan and overseas. While she continues to be active as a pianist, she took up a position at Yamagata University in April 2018 in order to mentor the younger generation. She feels invigorated by the natural scenery in Yamagata, and because of the sincerity of her students, she feels their potential for growth.

In childhood, Prof. Miwa's piano was her toy, and she studied abroad at the University of Music and Performing Arts Vienna.

For Prof. Miwa, who was born into a family of musicians, music was always by her side, and her piano was her toy. After studying at the Toho Gakuen Music High School, she studied abroad at the University of Music and Performing Arts Vienna, and completed her graduate program with unanimous top honors. She chose Vienna because it was the city where her beloved Mozart, Schubert, Beethoven and Brahms spent their days, and she wanted to feel traditions like the city's opera and music firsthand, in the buildings and cityscape that retain their original character. With few places to go for entertainment, she was able to spend every day in a city where music was naturally rooted into the surroundings, and immersed herself in genuine Western music at her own pace. "In that sense," Prof. Miwa says, "Yamagata might be similar to Vienna in that it has the Yamagata Symphony Orchestra, music is nearby, and there are few temptations so you can freely face the music."

Thanks to her awards at various piano competitions, her career performing all over the world shifted into high gear. When her concert opportunities in Japan increased, she returned to Japan. With her focus on her Japan-based performing career, she taught piano at places like her alma mater, Toho Gakuen Music High School. There was talk of her taking up a post at Yamagata University in summer 2017, and in April 2018, she was appointed as a professor in charge of teaching piano performance.

Balancing university teaching and a performing career, her surprise at students’ sincerity and her hopes for them.

Even after her appointment at Yamagata University, Prof. Miwa continues to put effort into her performing career as well. This is because her life’s work is to perform as long as people ask her to, and she believes that she cannot teach if she does not continue to play music herself. When thinking about balancing university teaching and a performing career, while the roundtrip distance between Yamagata and Tokyo is not easy, on the contrary, she says that being invigorated by the beauty of the four seasons and the natural scenery leads to her mind and body feeling refreshed.

Prof. Miwa is currently teaching a little less than 20 students, from undergraduate students to graduate students. Her students have a variety of goals and levels, from those who have studied piano since they were young and aim to learn in earnest, to those who aim to learn how to play the piano so they can become teachers. However, as a whole, all the students are highly respected for their sincere and exciting performances. Although the environment is robust in a numbers sense, with the number of pianos and the practice room, Prof. Miwa speculates that the difficulty of maintaining the instruments due to the severe temperature differences, and not being able to obtain musical scores as easily as one could in the city, makes the students defiant and fosters their rich musicality. In general, lessons are conducted one-on-three, and each individual student receives coaching after they perform. It could be said that listening to other students perform is an important lesson in learning how to play in an ensemble, as well as in empathy. 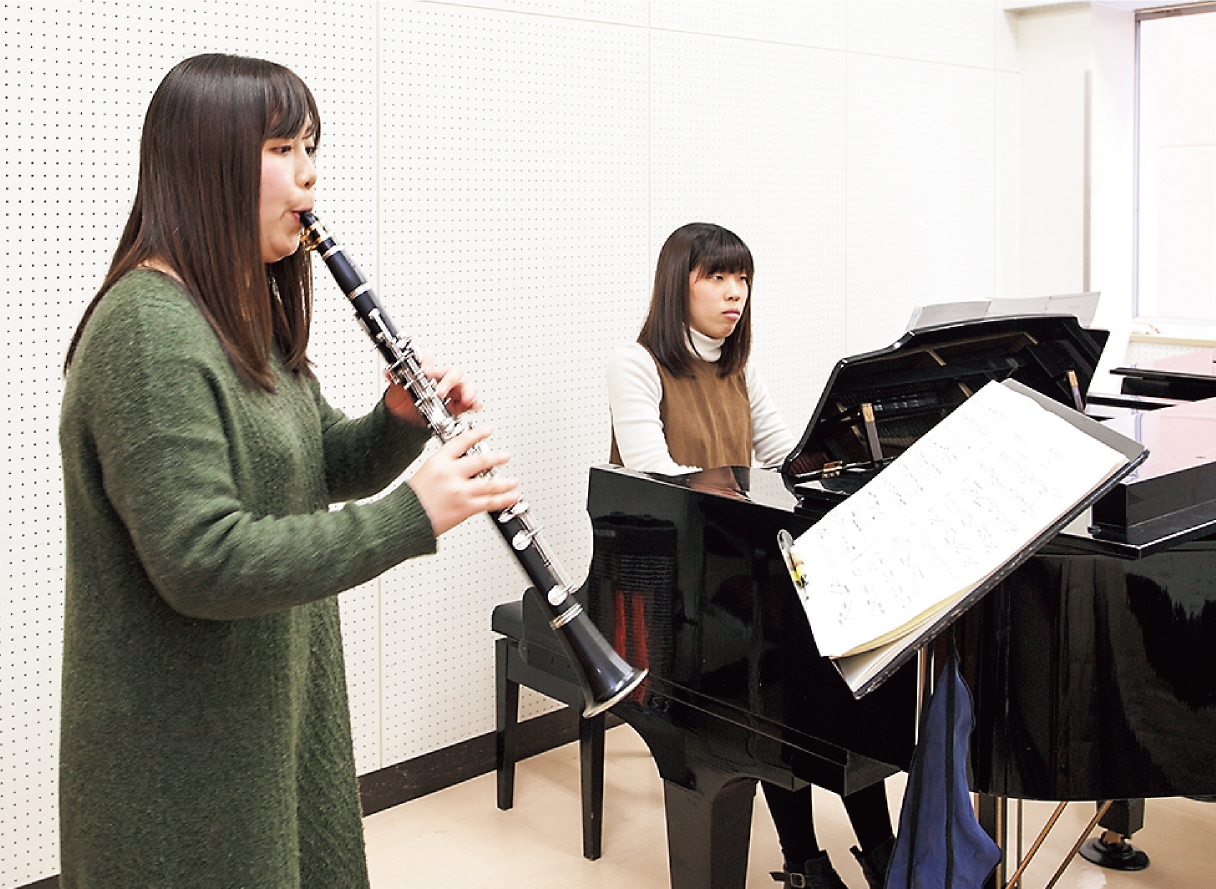 ▲Yamagata University's robust practice facility
Practice rooms where students can actively do lessons, and a robust supply of grand pianos and upright pianos. Together, students share efficiently to secure enough practice time. The piano and clarinet students are practicing an ensemble piece.

Developing herself through her performing career and sparking a change in student awareness.

The other initiative tackled by the piano students, which Prof. Miwa admires, is their participation in regular university orchestra performances as players of instruments like the double bass, horn and trumpet. By having the experience of playing non-piano instruments in an orchestra, they learn about the differences in how music resonates and other things that cannot be gained just by imagining them. A piano can play a variety of sounds with ten fingers, and is a solo orchestra, so to speak. Being able to imagine those differences off the top of their head, "Make this sound resonate like a flute," "This here should feel fuzzy, like a bassoon," and being able to deal with those requests, is a great advantage for a musician.

As a soloist and as a chamber musician, Prof. Miwa, who has a wide-ranging repertoire, is also expected to flourish even more as a pianist. She has already performed with the Yamagata Symphony Orchestra, has many music friends around Yamagata, and has shown interest in holding performances in Tohoku. She wants to build experience through those activities, and convey an even richer musicality to her students. In addition, she wants students to not just receive from the media, but to actively read books more, go to see art more, and fall in love more, which will connect to the richness of music. Small changes are starting to happen, even in the consciousness of students who touted modest piano-related goals. 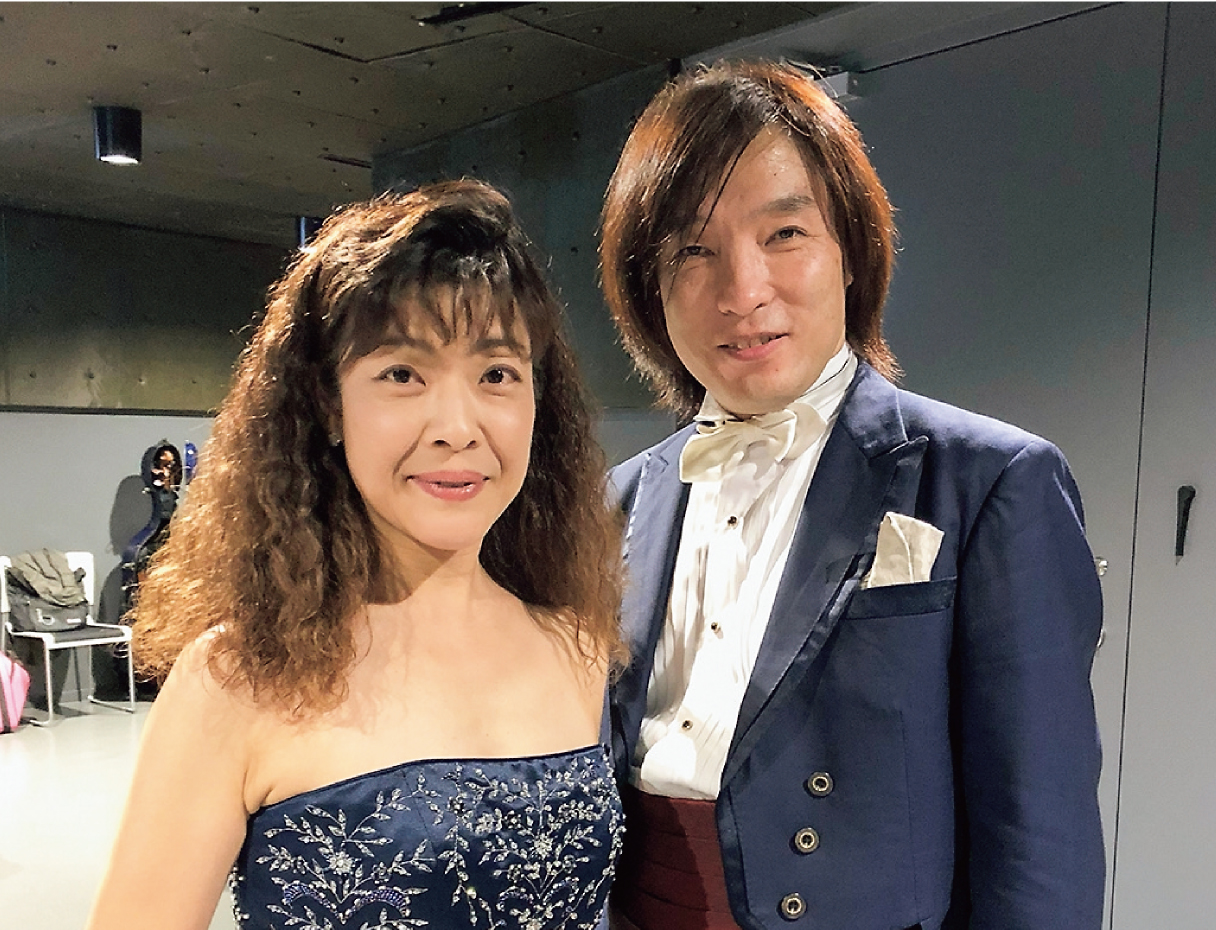 ▲Performing together with Maestro Norichika Iimori of the Yamagata Symphony Orchestra
In November 2018, at a Yamagata Symphony Orchestra concert held in Tsuruoka City, Prof. Miwa performed together with Maestro Norichika Iimori, the orchestra's musical director. A photo of the two after performing Beethoven's Piano Concerto No. 5, "Emperor." Yamagata is blessed with abundant natural scenery and music close at hand. 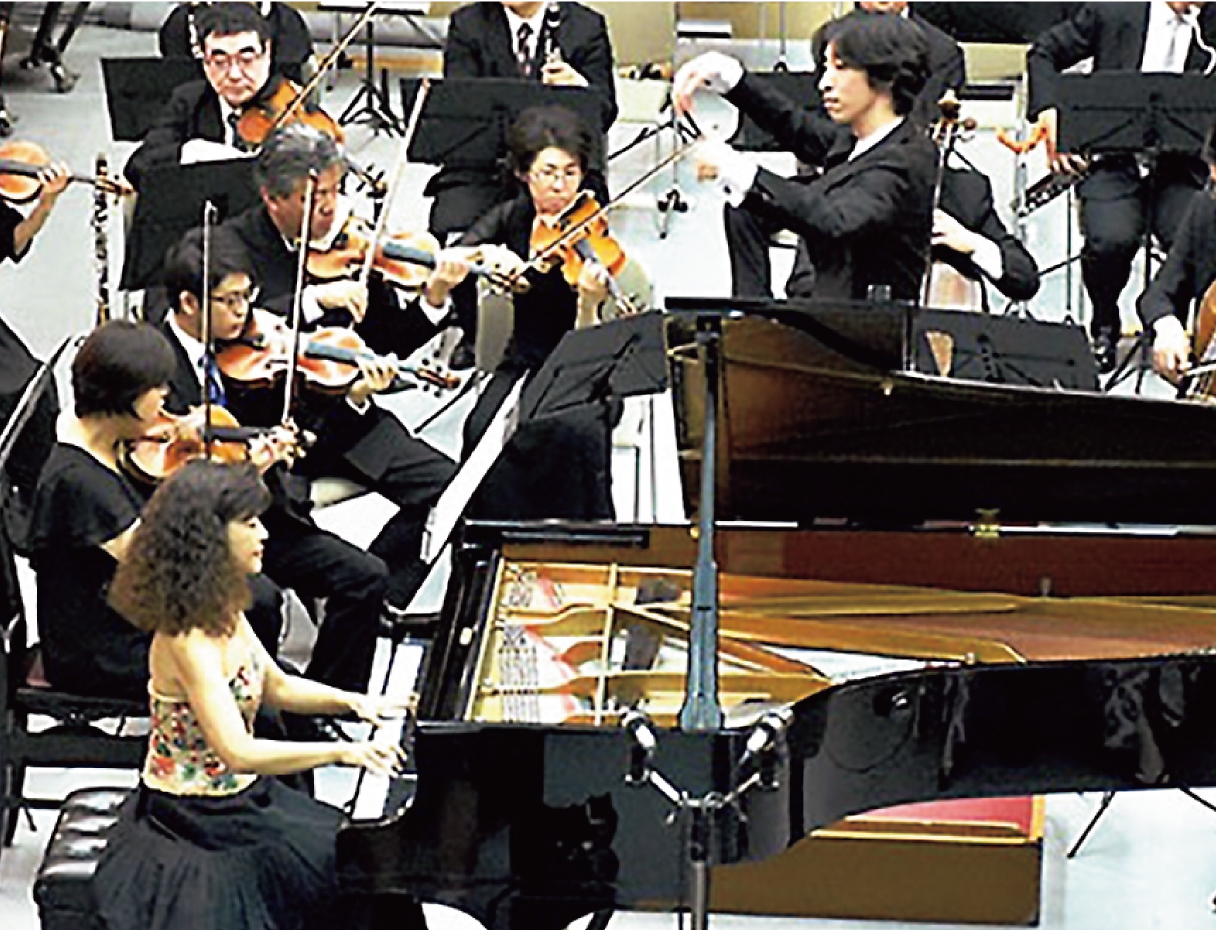 ▲Performing at the Affinis Summer Music Festival pre-concert
The Affinis Summer Music Festival 2018, a seminar-based music festival for professional musicians, was held in Yamagata City. Prof. Miwa performing Mozart's Piano Concerto No. 23 at the festival's pre-concert together with the Yamagata Symphony Orchestra in the Bunshokan Assembly Building Hall.

Specializes in music and piano. From Tokyo. Enjoyed playing the piano from a young age, and studied at the University and Graduate School of Music and Performing Arts Vienna, completing her course with the highest honors. She has won many prizes, and is also active as a pianist. Took up her post at Yamagata University in April 2018.

※Article, affiliations, etc. are from March 2019.