Home > About YU > About Yamagata 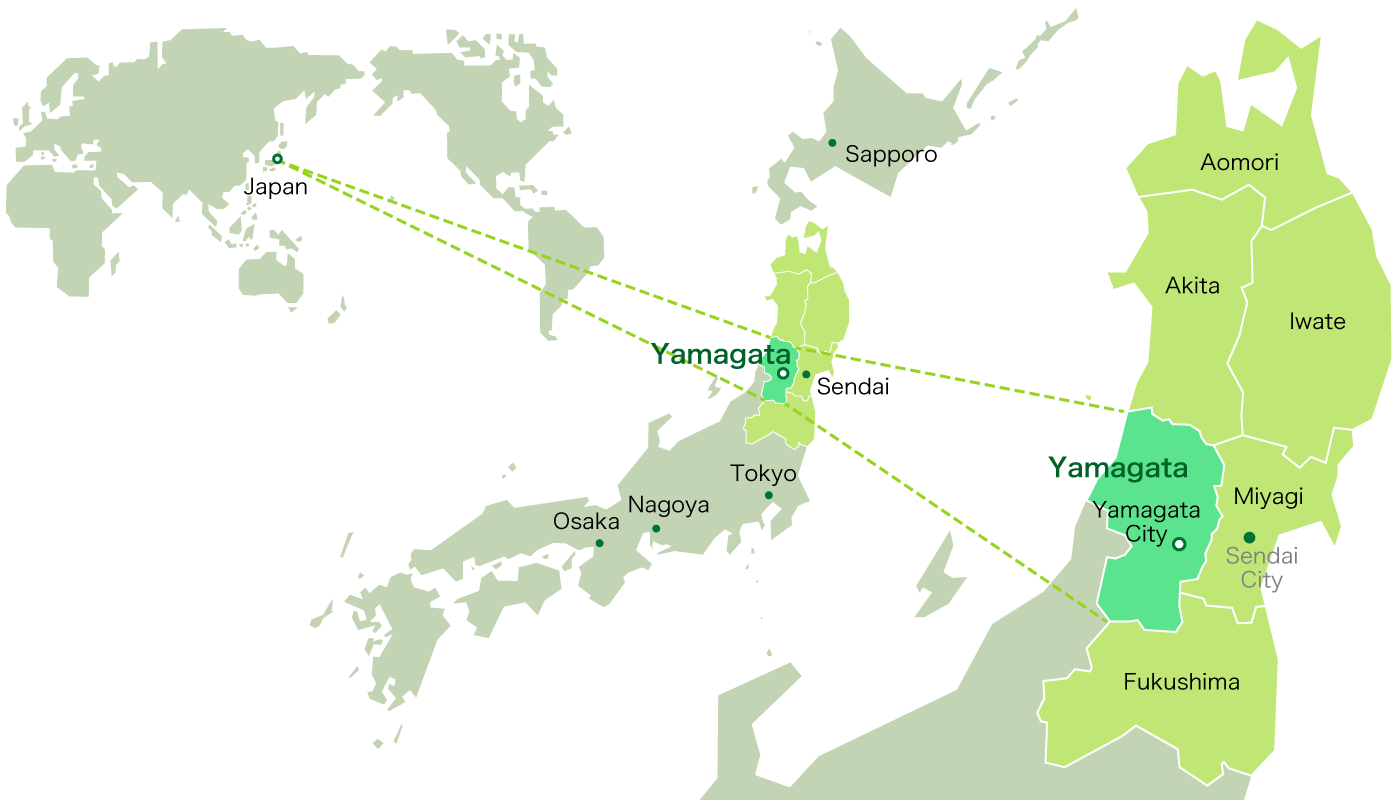 Japan, one of the top three industrial nations in the world, is located in Northeast Asia across the Pacific Ocean from North America. Japan, an archipelago stretching out from Okinawa in the south to Hokkaido in the north, is comprised of 47 prefectures. For more information about Japan, please visit the web page of the Japan National Tourist Organization (JNTO).

Yamagata is located in Tohoku (northeastern) region on Honshu (main) island. It is about 300 km north of the nation's capital Tokyo. It takes two and a half hours by bullet train from Tokyo to Yamagata. It is a mountainous region with an abundance of natural beauty including lakes, rivers, rice paddies and ocean. There are 226 hot springs in total in the Prefecture, and Yamagata is the only prefecture in Japan to have at least one hot spring in every municipality. For more information about the prefecture, please visit the web page of Yamagata Prefectural Government.

Yamagata University has four campuses dispersed across Yamagata prefecture. All the four campuses are located in central areas of the mid-sized cities, so it is quite easy to explore on foot, by bicycle, and by bus around each campus. Students enjoy their academic life in relaxing and laid-back atmosphere of Yamagata.

Murayama Region is the central area of the Prefecture. Yamagata City is the prefectural capital with the population of 250,000 and surrounded by mountains including Mt. Zao, a world-class ski resort famous for snow monsters (Juhyo). There are two YU campuses in Yamagata City: Kojirakawa Campus (Faculty of Literature and Social Sciences, Faculty of Education, Art and Science and Faculty of Science) and Iida Campus (Faculty of Medicine).

Okitama (Oitama) Region is the southern part of the Prefecture. Yonezawa Campus (Faculty of Engineering) is located in Yonezawa City, sitting at the foot of the Azuma Mountains where the Mogami River, the "mother river" of the Prefecture, originates. Yonezawa City is a former castle town once ruled by Uesugi Yozan, who is well known for carrying out financial reforms and promoting new industries.

Shonai Region is the northwestern part of the Prefecture, facing the Sea of Japan. The Shonai Plain, gifted by fertile soil and abundant water, is nationally famous for rice production. Mt. Chokai and Mt. Gassan are two of the 100 greatest mountains in Japan. The Academy award-winning film "Departures" (Okuribito) was shot in the area. Tsuruoka Campus (Faculty of Agriculture) is located in Tsuruoka City, the second largest city in the prefecture.

Mogami Region is the northeastern part of the Prefecture and the most rural and depopulated area of the four. Yamagata University does not have any campus in this region, but has been conducting the outreach program named "Area Campus Mogami" since 2005. Considering the whole Mogami Region as a university campus, YU students participate in various credit-bearing fieldworks with local people and have valuable experiences to face the real-time issues and problems such as localism, history, depopulation, decreasing birthrate and aging population.